Information about our awards here

RETURN TO TOP OF PAGE

At the heart of an eistechnik system is the remarkable Barents Gel, the eutectic solution that is frozen down to provide the refrigeration power. Unlike traditional eutectic solutions, they are lastomeric solids (gels), which provides two major benefits:

The Barents Gel is available in two forms: 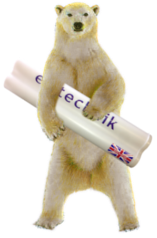 After the actual eutectic solution, the container it is housed in is undoubtedly second in importance for the performance of a eutectic system.

To maximise performance, eistechnik developed the revolutionary new eisbar - a specially designed tube made from a special grade of polyethylene designed to withstand low temperatures without losing any strength or impact resistance.